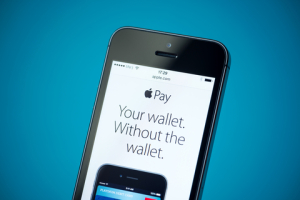 — June 8, 2015 — Apple® today announced Apple Pay™ wallet is making everyday payments even better by adding support for rewards programs and store-issued credit and debit cards with iOS 9. Apple Pay wallet will also give shoppers more ways to pay in the US, expanding merchant acceptance to over one million locations next month and bringing support for Discover this fall. With this addition, Apple Pay will accept credit and debit cards across all major card networks, issued by the most popular banks, representing 98 percent of all credit card purchase volume in the US.

“Apple Pay has kicked off a new era of payments and our users love the incredibly easy, secure and private way to pay,” said Eddy Cue, Apple’s senior vice president of Internet Software and Services. “We’re bringing our customers the most requested features with support for rewards and store-issued cards, and expanding how and where Apple Pay is accepted, which truly transforms the way people pay.”

With the addition of Apple Pay, the Passbook® app in iOS has become much more than simply a place for keeping coupons, gift cards, boarding passes and tickets. Starting this fall with iOS 9, Passbook evolves to become Wallet, bringing additional options at checkout with Apple Pay support for rewards and store-issued credit and debit cards.

To get the most out of purchases, users simply add participating rewards and store-issued cards to the Wallet app and seamlessly use them at checkout with Apple Pay. This fall, more than 80 million active members of Walgreens Balance Rewards program, the nation’s largest drugstore loyalty program, will be able to easily and securely use their rewards with Apple Pay. Additionally, Kohl’s Department Stores will begin rolling out Apple Pay to its 30 million Yes2You Reward program members. Others bringing rewards programs to Apple Pay users include Coca-Cola, Dunkin’ Donuts, Panera Bread and Wegmans Food Markets. Favorite store-issued cards available to Apple Pay users will include BJ’s Wholesale Club, Kohl’s Department Stores and JCPenney, with many more to come.

“Our customers around the country already depend on Dunkin’ Donuts as their all-day, everyday stop to keep them going,” said Nigel Travis, chairman and CEO, Dunkin’ Brands. “We can’t think of a better way to reward their loyalty than by offering Apple Pay and the option to use personalized rewards with their purchases.”

“Providing our shoppers with innovative ways to pay while offering flexibility, supports our commitment to delivering a simple and convenient customer experience,” said Kevin Mansell, Kohl’s chairman, CEO and president. “By integrating with Apple Pay in all of our stores, Kohl’s customers can choose how they want to pay, whether using their Kohl’s Charge or Yes2You Rewards loyalty points, payments are easy and secure.”

Apple revolutionized personal technology with the introduction of the Macintosh in 1984. Today, Apple leads the world in innovation with iPhone, iPad, the Mac and Apple Watch. Apple’s three software platforms — iOS, OS X and watchOS — provide seamless experiences across all Apple devices and empower people with breakthrough services including the App Store, Apple Music, Apple Pay and iCloud. Apple’s 100,000 employees are dedicated to making the best products on earth, and to leaving the world better than we found it.